On Thursday, 11 October 2018 the diocese of Kilmore held their Annual Pope John Paul II Award ceremony in the Cavan Crystal Hotel, Cavan. Peter Harte, the Tyrone Senior Footballer was the guest speaker at this year’s event. Bishop of Kilmore, Most Reverend Leo O’Reilly, presided at the event. 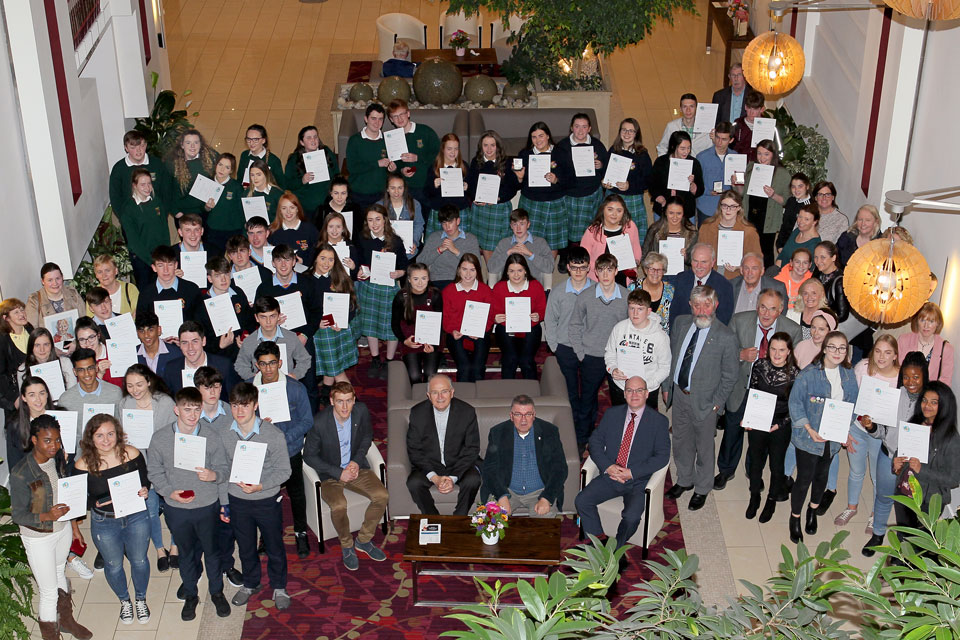 75 young people from the diocese received their Award

The Award is run in 23 Irish dioceses and was launched in the diocese of Kilmore in 2011 with the valued and valuable support of the Knights of St. Columbanus. Each young person taking part in the award programme chooses to get involved in parish life as well as participating in some social awareness activity in their locality. All award recipients complete a presentation in which they reflect upon the tasks they undertake in the light of gospel values. Finally, they reflect on how the award helps them understand and appreciate the contribution that young people can make in the Church today.

Seán Coll, Interim Diocesan Director for Youth and Young Adult Ministry and Director of the Kilmore Diocesan Pastoral Centre, welcomed all present to the ceremony especially the participants, their families, mentors, parish priests and school representatives.

After a short liturgy conducted by Fr. Andrew Tully, PP Lavey and Chaplain to St. Patrick’s College in Cavan, Bishop O’Reilly added his words of welcome to all present. He commended the young people for participating in the awards and for the witness they give in their parishes and schools. He made specific reference to the fact that many of the award participants had voluntarily agreed to act as Eucharistic Ministers during the recent Mass in the Phoenix Park celebrated by Pope Francis to mark the conclusion of the World Meeting of Families. He also thanked those who supported the young people in achieving their awards.

Peter Harte spoke eloquently and impressively of the importance of his faith in his life and especially in relation to football. He gave the young people present sound, practical advice and those present took great inspiration from what he shared with them.

The various award leaders received a special gift of a set of papal rosary beads which had been blessed by Pope Francis. A special presentation was also made to the former Diocesan Director of Youth and Young Adult Ministry, Carina McGinnell, to honour her contribution to the development of the award in the diocese and who has taken up a new post elsewhere. The local Knights of St. Columbanus presented a cheque to Bishop O’Reilly as a sign of their continued support for the initiative.