Archbishop Grzegorz Ryś, Archbishop of Lódź, Poland and Bishop Donal McKeown presented the Pope John Paul II Award to 542 young people from all over the Diocese of Derry and beyond. 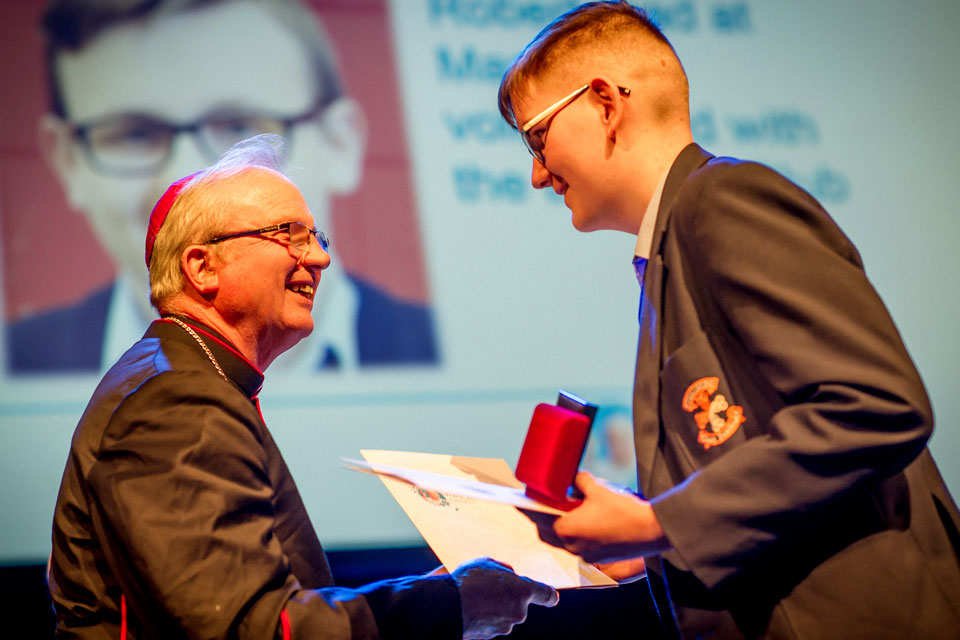 This was the 12th Annual Pope John Paul II Award ceremony in Derry. The Award was launched in Derry in 2006 by the Papal Nuncio at the time, Archbishop Lazarotto. It was never imagined that the Award would spread beyond the Diocese. However in the last 12 years the award has been introduced in 22 dioceses in Ireland. Supported by international coordinator, Mr Tony Brennan, the Award has also been introduced in the Archdiocese of Birmingham and the Diocese of Hexham and Newcastle.

The 542 young people who received their Award came from 20 second level schools representing 50 parishes in the diocese and 16 parishes from outside the diocese. The Award was was also presented to young people from Moville Presbyterian Church, Church of All Saints, Richill Park Baptist Church and Coleraine Quaker.

Young people speak of their experiences

The ceremony focused on the achievements, dedication and commitment of the young people gathered. Five young people shared their personal experiences of taking part in the Award through a short video.

The ceremony was attended by family and friends of those receiving the Award, school staff, parish groups, Award volunteers and invited guests. Entertainment was provided by the Longtower Folk Group and St Mary’s College, Derry’s Traditional Music Group.

Photographs from the Award ceremony

Group photographs from the night are published below as well as lots more on the Pope John Paul II Award Facebook page.

Since its inception, over 25,000 young people have completed the award, 4,950 of these from the Diocese of Derry. It was recently acknowledged that the Pope John Paul II Award is the largest youth movement in the Church in Ireland.